Şark Yay, is a type of firearm that uses gunpowder and currently in use by several factions mainly Turkiye Stratocracy during the Rumeliana war.

Due to Kusanagi's demise, it's stated by Silah Ismail that the art of Şark Yay making is lost forever, thus no one across Rumeliana have ever encountered or produced such instruments of slaughter. As far it goes, the Mizrak Stratocracy were the first ones in the entire continent of Rumeliana to have successfully acquired some of them, notably The Yeniçeri who made great use of the firearms.

Bayezid mentioned that he got 77 of them from a fellow Navarat worshipper that came to Liman from a small eastern country that would later got conquered by Cinili. The country's name is revealed to be Kusanagi.

A hand held portable gun equipped with various of firing mechanisms such as the Matchlock, Miquelet etc.. These are capable of penetrating many forms of metallic armor and shields, rendering them completely useless. However they are inaccurate unless they are used by a skilled marksman, therefore general usage requires volley fire in groups in order for them to be effective. Additionally, they take a relatively long amount of time to reload compared to conventional bows, and cannot be easily reloaded while on the move due to the awkwardness of the motion.

The firearms used by the Bayezid's Yeniçeri is closely related to the real life arquebus, but features a similar appearance to the later musket due to it's size and shape. The overall design resembles a Turkish Musket with matchlock firing mechanism.

First demonstration
Add a photo to this gallery

Larger than regular "Şark Yay", cannons are firearms capable of firing at a great distance. The large projectile delivers a mighty impact, more often ideally used for "Castle Crushers". Vasco took the first step with his blueprint of creating monstrous artillery such as the bombards.

Built upon the approval of Vasco's schematics, Turkiye produced multiple super-guns, which due to their size would require the help of Oxen to be transported in two pieces on a huge cargo cart.

Aside from their Phoenix Fire, a successor to Greek Fire, their small-bronze Şark Yay cannons can be seen on fixed mounts on their ships. The technology may have been shared among the alliance. It is plausible that they were derived from Vasco's products. 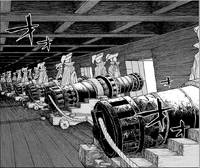 Small bronze cannon
Add a photo to this gallery

Retrieved from "https://shoukoku-no-altair.fandom.com/wiki/Şark_Yay?oldid=7868"
Community content is available under CC-BY-SA unless otherwise noted.