Antonio Lucio is the current doge, the one with highest authority in the city state of Venedik.

Antonio has a pretty face and youthful appearance, an unusual trait for someone of his station and age. He has shoulder-length wavy blonde hair, a shade lighter than Mahmut's. His good looks further accentuated by his habit of putting up a cheerful—albeit a bit mischievous—smile on his face. He's almost always seen with his complete doge attire, which consists of an ermine cape, a corno ducale (a kind of ducal hat), and a long, dark coloured loose dress akin to a frock (medieval priest's attire) with golden linings on the torso and neckline. When he's not wearing this attire, he uses the standard Medieval Italy's style of clothing, which consists of hose (Medieval Age's stockings), loose undergarment, and a hat. 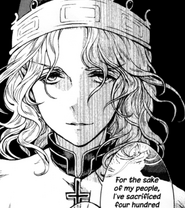 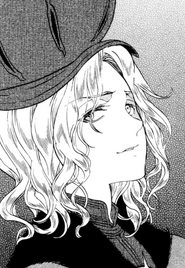 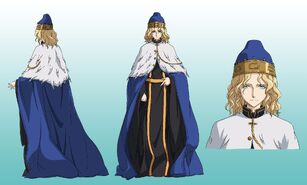 Despite his constant smiling and mischievous nature, Antonio is a highly rational individual, valuing his country's welfare above anything else including his personal feelings. This drove him to abandon Venedik's long time ally, the city state of Phoenicia when it waged a war against Baltrhein in consideration of Venedik's enormous trading interest with the growing empire, that caused his close friend's demise. In spite of this, it's pretty clear that this event dealt quite a deep psychological blow to him, shown by eyebags under his eyes a few days after Phoenicia's fall and Brega's worried glance towards him. Even an outsider like Mahmut could tell that he's suffering internally because of this decision.

Despite his seemingly ruthless persona, he managed to earn his men's respect and complete devotion, while in turn he gives his full trust and support to them.

As the leader of a small country with trade as its lifeline, Antonio has shown a great deal of ingenuity when dealing with any problems, successfully shaping up Venedik into one of Centro's powerhouses. By using information gathered from Venedik's merchants that traveled all around the world, he carefully manages Venedik's policies from behind the palace walls. He's also an excellent negotiator in treaties, managing to convince the Turko-phobic Cuore to let Turkiye take custody of Chielo.

It's stated that he's a close friend of Phoenicia's magistros, Konstantinos. Later in chapter 94 it's shown that they have been close friends since before Lucio became a doge.

Retrieved from "https://shoukoku-no-altair.fandom.com/wiki/Antonio_Lucio?oldid=7651"
Community content is available under CC-BY-SA unless otherwise noted.