Armut Ayse is the young daughter of Sultan Fatma, elder sister of Kemal, and the only niece of Sultan Baraban and his successor Sultan Beyazit.

After the civil war, she is promoted to the title of Vizier-i-Azam and is in charge of Kemal's studies until he is to turn fifteen and officially succeed the throne.

In spite of her stoic nature, she is considered a beauty by some people. She has long, dark, wavy hair styled in segmented ponytails. She also wears a melancholic and quite serious look on her face, which is accentuated with her long eyelashes. Ayse wears a long, draped pink dress with a high collar and underneath wears a pair of salwar trousers in the same colour. On top of it all, she appears to be wearing a jacket with open sleeves. She also wears a pair of red shoes, which look similar to a pair of tsarouhia. 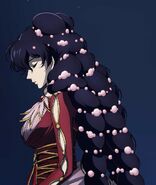 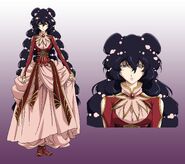 Ayşe is a rather stoic woman. She appears to be quite blunt and will speak her mind, regardless of if it happens to hurt somebody. Such as when she meets Mahmut for the first time and bluntly calls him stupid and naïve. She also appears to be quite intelligent and daring, although her attempt to lock her own mother up caused her to be labelled as a traitor.

Ayşe is a proud woman and seems to have a strong sense of responsibility, as she accepts that she will one day be married to sultan Orhan of Kilic. She also has a strong sense of justice and appears to be ready to sacrifice herself for the things she believes in, if the situation called for it. As shown after the civil war had ended, Ayşe is not the type of person to let her emotions get in the way of the greater good. Even though Fatma is her mother, she pushed for her execution because she had betrayed Türkiye. Despite her serious and aggressive side, she shows a much more gentle and kind personality around her uncle Beyazit.

She is a very skillful politician, and like most of the Turkish citizens she is a good rider.

Retrieved from "https://shoukoku-no-altair.fandom.com/wiki/Armut_Ayse?oldid=7688"
Community content is available under CC-BY-SA unless otherwise noted.