Their main weapon is long pike-length spear but they can use a sword if situation demands so.

The long spear's main advantages is that it can be held as a one-handed weapon. This allows the army to hold and use the shields with their freely left-handed, thus capable of defending against cavalry or infantry and protect themselves against missile attacks.

400 years ago during back The Great Urado war to Knights Ell kingdom 80 years before, the descendant imperial army was shown to have worn a Lorica segmentata[1] and Imperial helmet[2]. They carried a sword known as the Pompeii-type Gladius[3].

However in current era the standing-army wears a plated mail[4] or Lamellar armour[5] and Kettle hat[6] with mail coil for head protection.

The Standing Army is Balt-Rhein's bulwark workhorse, competent in engagements combined with their synchronised or drilled formation movements allowing a variety degree of choices depending current situation. They gain huge advantage in reach due to their long pikes compared to swords, optionally they can draw swords if needed this requires them to abandon their pikes.

However unlike the Yeniçeri their embodiment is linear lacking countermeasures against ranged-equipped armies aside from using portable ballista by the engineer corps. Thus making them depending on their own formation and tactics. Another note is that most of their offensive battle formations: Phalanx, requires flat terrain landscapes, putting considerable disadvantage fitting in uneven levels [7]. Proven at the Murmullo Basin [8]

Within the Imperial Army's battalion are composed of 500 infantry personnels. These contain:

The Phalanx is their main-widely used default or general purpose formation, 500 piked-armed heavy infantrymen tight formation in a form of an rectangle or square. 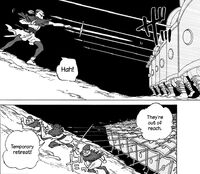 Schnabel formation is used best against incoming cavalry. All 500 pikemen reforms in a manner of similar to pike square pikes facing all sides from front to rear, left to right flank.

Last stand in formation.
Add a photo to this gallery

The Rückenschild meaning, "carapace", each 500 men would form aligning their shields to a more well-protected condense formation shields faced in the front and on-top almost forming a turtle's shell. Balt-Rhein's men of the first row would hold firm their shields up to the height of their shins to their eyes, the rest up to the rear follow suit placing their shields on-top (180 degrees) rested upon their helmets as counter-balance. If situation demands so, soldiers on both flanks of the formation stand sideways or backwards (rearguard). This formation allows the Balt-Rhein's Standing Army to protect themselves against missiles from the Front, top, side or rear with less-to-no casualties as they move towards their target. However comes with a price trading speed and mobilty for an absolute-defensive formation. [9]

Blume formation.
Add a photo to this gallery 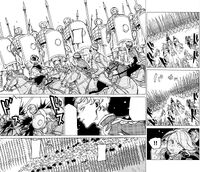 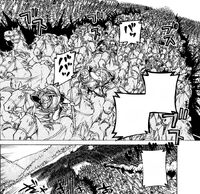 Cavalry decimation
Add a photo to this gallery 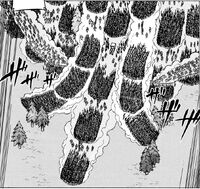 On to their formation

Brace!
Add a photo to this gallery

The 4th battalion met their doom as they engulf in flames during entering a abandon new settlements in Chielo.

Led by Lieutenant General Tristan Baret. The 13th Battalion are made up of 5,000 military engineers or mechanics responsible with siege weaponry equipments such as lightweight siege Ballista armed with grenades load-out, which are used to lay out battle-ground foundations and besieging castles. Aside from combat aspects on daily-life routines, they are tasked with performing public constructions such as building barracks and tunnelling. An additional 2,000 men from the 14th Battalion joined as protectors. 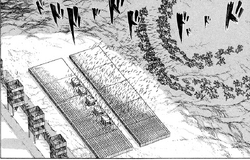 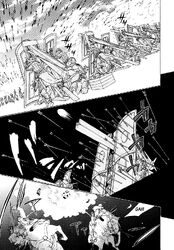 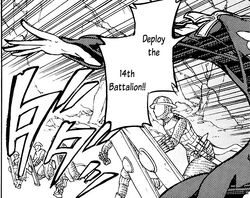 CGI Model (mid)
Add a photo to this gallery

Retrieved from "https://shoukoku-no-altair.fandom.com/wiki/Balt-Rhein_Standing_Army?oldid=7640"
Community content is available under CC-BY-SA unless otherwise noted.