Director Carvajal (Karubaharu カルバハル) is a supporting character of Shoukoku no Altair. He was the director of the Republic of Chielo.

Carvajal is a tall man with his 191cm. Usually seem with a big smile on his face and bright, big and kind green eyes. Carvajal's eyebrows are thin and he has an oval-shaped face, as well as a rather pointy chin. His skin is pale and he has wild, long and thick blond hair hanging down his back and framing in his face.

He wears a simple beige shirt with small details in the front and a high collar. On top of this, Carvajal wears a red vest with blue details and he wears a simple pair of paints. Around his waist, he has tied a piece of cloth and he wears thigh-high boots that are relatively loose. 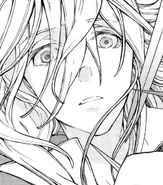 Carvajal is seen to be a very kind and playful person. It appears as if he wishes to save everyone that happens to be less than fortunate, such as when he changes the plot of "The Heavenly Key", because he felt as if it was unfair that not everyone would be able to achieve their "final feliz". Since the beginning, he gave off a very confident persona, stressing the fact that everything would be alright to the point of naivety. Carvajal appeared to be a happy-go-lucky kind of person and he would comfort those feeling troubled with encouraging words.

It seemed as if he wished to save everyone that he possibly could, which was also a great flaw of his. He didn't want to turn anyone away, which resulted in internal problems in Chielo. Carvajal was a cheerful person but proved to have his own demons as well, since he was obsessing so much over the idea of everyone achieving paradise. For this cause, he was ready to sacrifice a lot, including the lives of those standing in his way. He proved to be a very brave person, as he was smiling even towards the end. Carvajal was also very forgiving and understanding of the desires of others.

Not much is shown of Carvajal's past to show how he turned out the way he did. However, it appears as if Cassandra and he were childhood friends.

Carvajal shows a great understanding of the techniques and mind-set of the imperial soldiers. He is also seen to be quite intelligent and has good strategic thinking.

Defending Chielo from the Imperial Soldiers

Carvajal managed to take out many men with Chielo's defense and offense strategy, capturing the soldiers and burning the buildings to the ground.

Retrieved from "https://shoukoku-no-altair.fandom.com/wiki/Carvajal?oldid=7754"
Community content is available under CC-BY-SA unless otherwise noted.