Cyrus is a young man of average stature and lean physique. When first introduced in the story, Cyrus sports a dark hat with dreadlocks, small skills, feathers and beadings attached to it, most likely in order to hide his true identity. At some point, he removes it and reveals that he in fact has dark, short and seemingly thin hair gathered into a small ponytail.  In his initial appearance he also wears a dark cloak to cover his body. In addition, he wore a lip piercing which hasn't been shown again. Cyrus has since the beginning of the story, carried a tired expression, mainly caused by the dark skin under his eyes. Accordind to the fanbook, this was caused by the make-up he wore staining his skin. He wears a golden earring on the lobe of his left ear and a set of several golden earrings on his right ear.

His usual attire now consists of dark clothes still; a black, worn out tank top above which he wears a mantle and a scarf with a striped pattern, as well as black pants that reach his calves, where they meet his boots.

On his left arm he has inked a dark tattoo of a lizard, which is a reference to his alias. 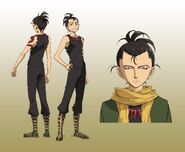 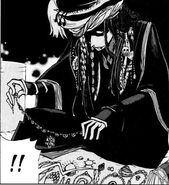 Cyrus's initial appearance in the manga

Cyrus disguised as a woman
Add a photo to this gallery

Cyrus is a person that seeks thrill and meaning in his life; having seen the ugly side of the "high life" through his own father. He isn't very fond of politicians, claiming that they don't use common sense[1], most likely a different way for him to say that he doesn't like when he can't predict what others plan to do. He's ready to risk his life for the sake of the greater good and seems to value honesty greatly due to how he questioned Mahmut about his reason for trying to help Phoenicia. He isn't the type to stand back when he's angry, as he yelled at Antonio Lucio in Venedik after they hadn't gone to save Phoenicia. Sometimes, he gives off the impression that he doesn't care and Cyrus often comes off as a very casual person that is merely an observer but will take action if the situation calls for it. He has very complicated emotions regarding Venedik and as a result of this, he is incredibly suspicious of Abiriga, to the point that he behaves childishly towards him.

While Cyrus isn't seen fighting very often, he appears to have fast reflexes and to be relying on defense a lot. It appears as if he knows some light signal code used by the ships in the Centro Sea, as he used that to communicate with Abiriga when they had been captured by sultan Baraban back in Mizrak.

• Cyrus' favourite food is mutton and one of his hobbies is eating. Another hobby if his is muscle training.[2]

• Kato Kotono once stated that the character she would've wanted to be friends with, is Cyrus.[2]

• Cyrus' name is Greek and means Cyrus, son of Apollodorus.

Retrieved from "https://shoukoku-no-altair.fandom.com/wiki/Cyrus_gios_Apollodorus?oldid=7461"
Community content is available under CC-BY-SA unless otherwise noted.