Erbach (Erubahha, エルバッハ) is the captain of the El Toro mercenaries from the Mercenary City of Tauro that is currently employed by Turkiye Stratocracy as back-up soldiers in their war against the Balt-Rhein Empire.

At first, he thought of Mahmut as someone not suited for battlefields, but grows to respect him once the young Pasha proves him otherwise. He now acts as his guide for South Rumeliana's culture and politics.

Erbach is a young man with ginger hair (sometimes pictured as blond) and fair skin. A characteristic trait of his are his squinted eyes, which are usually the target of nicknames and taunts (reference needed). He's almost always seen smiling in a mischievous way.

His usual attire is an extravagant light green tunic with puffed sleeves, accompanied by a yellow cape draped over his shoulders, a silky braid of red fur across his chest and a black scarf with a white-dotted pattern, along with a gold necklace. He wears green puffed pants that become tight-fitting in the same fashion as his sleeves, and equally green jester boots.

Erbach is always seen with a green cavalier hat, adorned with feathers of different colors. 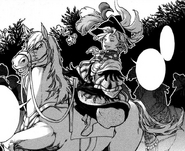 Erbach color
Add a photo to this gallery

Erbach is shown to be a cheerful and laid-back person, assisting whoever provides him with enough money to do so. War isn't a game to Erbach and he therefore can't stand whoever isn't up to the task setting a foot on the battlefield. He even calls it "repulsive", to emphasise his dislike for it[1]. He's blunt and direct, stating facts and opinions he believes are right, no matter how the person affected by his words will feel. As a mercenary himself, he has quite a negative view of his kind, claiming that they are selfish by nature and those who won't acknowledge that, are bound to fail.

He is an enthusiastic type of guy and wants to know the truth about things, rather than stay behind and hear from others[2]. Despite his laid-back persona, it appears as if he has enough authority to make others follow and respect him. He's always thinking about ways to benefit both himself and El Toro, repeatedly offering people to buy the services of their mercenaries.

Erbach is shown to be highly capable fighter, living up to his profession as a mercenary. He's fast and flexible and appears to have good judgement, easily killing others he has acknowledged as a potential threat. Erbach also proves to be quite intelligent and understanding of military tactics, as he informed Mahmut how and why people have lost in the past and how Mahmut should approach the city in order to have the slighest chance of winning[1].

Defending Chielo from the Empire

Retrieved from "https://shoukoku-no-altair.fandom.com/wiki/Erbach?oldid=7079"
Community content is available under CC-BY-SA unless otherwise noted.