Jacques Jourdain was one of Balt-Rhein's Hermann and a supporting character in Shoukoku no Altair. He was very loyal towards the empire and that was evidently the cause of his death.

Jacques was a short, young male with a usual strict or aggressive expression. His skin was light and his hair as well, reaching below his ears and curling at the tips. He had thicker eyebrows and big but usually narrowed eyes, adding to the impression that he was usually angry.

His attire consisted of a scarf tied as a ribbon around his neck, a tunic with open sides, heavy armour to protect his body underneath and gauntlets. 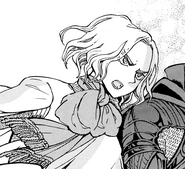 Jacues was a very loyal young man and believed in devoting his everything to the empire, most likely a trait he received from watching his father when he was a child. He had a strong sense of responsibility, shown when he criticised the Hermann who failed to show themselves before the emperor[1]. Honour meant a lot to him and he refused to betray his empire, even to the bitter end[2].

Jacques was determined and confident, both in the abilities of the empire and his position as a Hermann. He was unafraid to put himself in danger and would disobey orders if he believed they went against the best possible outcome[3], showing that his vision easily got clouded by his emotions. It was more important to him than anything else, to honour the pledge between the empire and his father, most likely sparked by a need to honour his father's loyalty towards the emperor[4].

Jacques was courageous and brave, risking his own life for the empire. However, as bright and skilled as he may have been in battle, his good judgement was weakened by his own emotions. He proved to be skilled at riding horses and wielding a sword from horseback[5].

The Battle Against Türkiye's Imperial Empire

Retrieved from "https://shoukoku-no-altair.fandom.com/wiki/Jacques_Jourdain?oldid=7042"
Community content is available under CC-BY-SA unless otherwise noted.