Kara Kanat Süleyman is one of the secondary protagonists of the story. He is the bashkan (head) of Turkiye's international spy agency, Göz Kulak. He is the partner of Katerina. Just like Mahmut, he is a Tuğhril clansman.

Since he is a Tuğhril clansman, he shares some facial characteristics with Mahmut; having blond, spiky hair which he has kept short and is parted in the middle. Süleyman has quite narrow eyes, in the distinct colour of blue.

However, despite his similarities, there are a few traits that are unique to him due to age and his own personal physique and personality, such as the enormous size of his eyebrows and the existence of stubble on his chin that began to appear in his period of devastation after Tuğhril Village got destroyed. Befitting of his background as a former falconer of Florence's former Golfaloniere, he wears a western style clothing; in the form of a red scarf, a long-sleeved black shirt with red stripes, black, tight pants and boots in a similar fashion, completed with a long, black cape that already got tattered on the seams. He is also seen with a beige bag with green stripes and a red shoulder-strap. 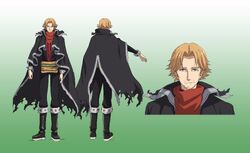 He is generally a cheerful and very sociable person, easily forming bonds with strangers with well-placed smiles and smooth words. Like Mahmut, he somewhat has a strong sense of justice, even though after all that he has been through he has learnt to compromise a bit when it comes to his idealism from time to time; a thing that is not always easy for him to do. Süleyman creates the image of having a confident persona and as if he always has control of the situation at hand. He's quick-witted and doesn't hesitate to make decisions, even if they sometimes appear to be irrational, such as when he throws the agreement of the Cuore Alliance into the fire because he couldn't approve of it[1]. Süleyman is courageous and stubborn, willing to do anything to benefit Türkiye and Zaganos Pasha, even if he ends up getting hurt as a result of it. When he gets upset or angry, he can become a bit intense and lose his composure[1]. However, this is usually done with some self-awarance and he purposely let's himself become emotional if it's for the sake of the greater good.

Being a more senior falconer than Mahmut, his techniques as a falconer, of course, far exceeds Mahmut's. He is also a very talented spy and as a result of this has a great understanding of politics and culture. Süleyman is capable of using smooth words to charm others and give him the information he wants.

Retrieved from "https://shoukoku-no-altair.fandom.com/wiki/Kara_Kanat_Suleyman?oldid=7260"
Community content is available under CC-BY-SA unless otherwise noted.