Şapka Ibrahim is the governor of Turkiye's City of Hisar, which is a part of Zaganos' first province. He is also a long time friend of Mahmut.

Contrasting with Mahmut's serious upbringing, Ibrahim is a man with relaxed and lively attitude. Despite that, he, like Mahmut, is quite stubborn and earnest about the things they believe in, and he really cherishes people around him. However, his good heart also becomes a downside when it comes to his job as an authority figure, he acts mainly on feelings, causing him to sometimes act rashly. 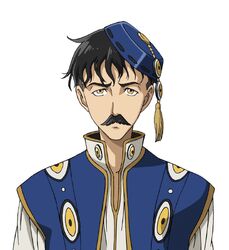 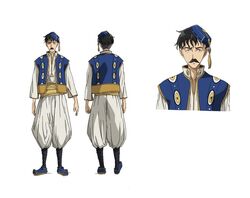 Retrieved from "https://shoukoku-no-altair.fandom.com/wiki/Sapka_Ibrahim?oldid=6148"
Community content is available under CC-BY-SA unless otherwise noted.