Türkiye Stratocracy / torukie shoukoku / Turkiye / Torqye Paşalığı is one of the fictional countries in Shoukoku no Altair universe and the core member of Greater Turkiye. It's based on real-life Ottoman Empire.

It's located at the eastern part of Rumeliana region. It shares a border with two countries: Baltrhein Empire at the West and Kingdom of Urado at the North. It also shared a border with a lot of city states at its southern territory. The landscape of Turkiye is quite rocky with several hills and decent vegetation.

It's stated that nomadic horse-riding tribes are actually newcomers in the Rumeliana region. They came to Rumeliana approximately 500 years prior the main storyline.

Later, the tribes joined forces together and formed the Turkiye Stratocracy 76 years prior the main storyline, and started a sedentary lifestyle.

Turkiye Stratocracy's territory is divided into 13 eyalet (provinces) and 4 special regions excluding Altun, the capital. While each of the 13 provinces is governed by a single vizier, the 4 special regions have a separate government system led by a sultan, making them become like a sort of little kingdoms in a country.

As from chapter 76 of the manga, Chielo is a new province of Turkiye, marking the first Turkish expedition since the foundation of Turkiye Stratocracy 76 years ago.

Because of its horsemen tribes' heritage, Turkish Army relies heavily on horse. Every personnel in its army is required to master the art of riding horse since their days in Academy. In battles, they use the horse not only as means of transportation, but also as means to attack the enemies. Turkiye has two cavalry division in use: Sipahi and Akıncı.

Because it only has one port at Liman, Turkiye doesn't have any (known) Navy units.

Aside from horse mastery, infantry personnel such as the Greater Turkiye's standing national or universal infantry Yeniçeri and others work as "organized power" rather than individual. By dedicated arduous training which includes learning new tactics from different locations and times to adapt.

This therefore allows the stratocracy to catch up in a new 'modern warfare' compared to other nations such as the Baltrhein Empire. 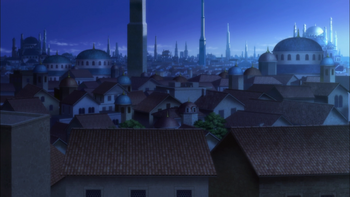 Retrieved from "https://shoukoku-no-altair.fandom.com/wiki/Turkiye_Stratocracy?oldid=7561"
Community content is available under CC-BY-SA unless otherwise noted.