Zaganos is a man with tall, yet slim stature. He has short, purple-coloured wavy hair that's not really well-combed most of the times, causing some stray strands to fall in front of his face. That, along with his slanted eye design and permanent frown on his face give him an air of uneasiness everytime he appears. Contrary to Mahmut, his choice of clothing mostly consists of long, flowing fabric with dark colours such as black (for the inner shirt) and dark purple (for the robe). Just like another turksmen, in formal occassions he wears a long, black turban with a peacock's feather embedded in front of it as a decoration. 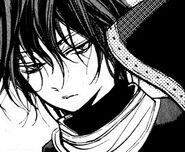 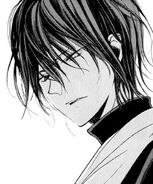 Retrieved from "https://shoukoku-no-altair.fandom.com/wiki/Zehir_Zaganos?oldid=4403"
Community content is available under CC-BY-SA unless otherwise noted.